After a two day exciting visit to Montreal, the next stop was Quebec City in the province of Quebec. This city is a beautiful destination with a part of town which looks quintessentially European with narrow cobbled streets and intricate architecture a couple of centuries old.

Although we stayed only for a day in this marvellous city, we took back fond memories of this city steeped in history and regalia.

Where we stayed: Manoir de L’Esplanade. Located at a convenient spot which is a walking distance from the town square. I liked the hotel – we had a comfortable room and lovely sumptuous breakfast. The parking was at a common car park area which was a few minutes walk from the hotel.

How we got around: Entirely on foot. We walked everywhere, and it is easy as the tourist attractions we visited are all within walking distance. There are cabs available as well if you need a ride.

The central square from where there is the boardwalk offering an unobstructed view of the lake and the citadel and château Frontenac. It’s abuzz with activity and roadside cafés, and bistros.

This château was built by the Governor General and was eventually converted into a luxury hotel. Visitors are allowed to walk (at no cost) around the main floor and the floor below which has a gallery explaining the history of the château.

We took the paid guided tour which included a tour of one of the tea rooms, the Ballroom, and lots of anecdotes as well as stories of hauntings in the hotel (something about unrequited love)! It was thoroughly enjoyable and the guide was a man dressed as the Governor General – silly but funny!

The Citadel is the highest point in the city which overlooks the boardwalk and gives a splendid view of the lake. It is a short but steep climb, but the view will fill your heart with joy – promise! 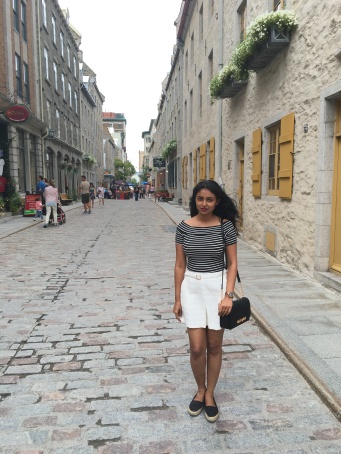 Funiculaire is the cable car which leads down to another area in the city (where I stand in the picture) which is a complete touristy spot. Here you’ll find stores selling lots of different types of items such as jewellery, clothing, memorabilia, cafés, and ice cream parlours and tons of opportunities for a photo-op! The streets are, once again, very European cobbled style. One can easily spend an evening walking around and exploring this part of the town.

After this, we had a satisfying dinner at an Italian restaurant and ended the meal with a dessert coffee. Then we took a lovely long walk back to the hotel, with the idea to take in as much of this city as we can. After a sumptuous breakfast the next morning, it was time to drive back home.

8 thoughts on “A Day in Quebec City”

Happy first day of Spring! 🌻 Throwing back to Spring in the southern hemisphere (October 2019). These are #flowers of the delicious #calafate berry. I was such a bee magnet on this day which I LOVED coz I absolutely adore #bees 🐝🌼 Hope everyone's staying safe and enjoying Spring from home!
I've put on a big scarf and a big smile to deal with it 😁❄️
Look at the views on this hike!! Found this short video from my Patagonia archive 😍💙 I'm truly grateful that I was able to experience the majestic beauty of these mountains - looking at these videos now makes it seem so surreal! Was I truly here? #patagonia #torresdelpaine #travelgram #hike #traveldiaries
Wish you a very happy new year! May it be full of happy moments that make for favourite memories for a lifetime ✨
Cabin coziness!!
Ringing in a milestone year and reflecting on this past year that has been full of adventures, and also moments that have the comfort of that "same old". Thank you for all the love ❤️
%d bloggers like this: